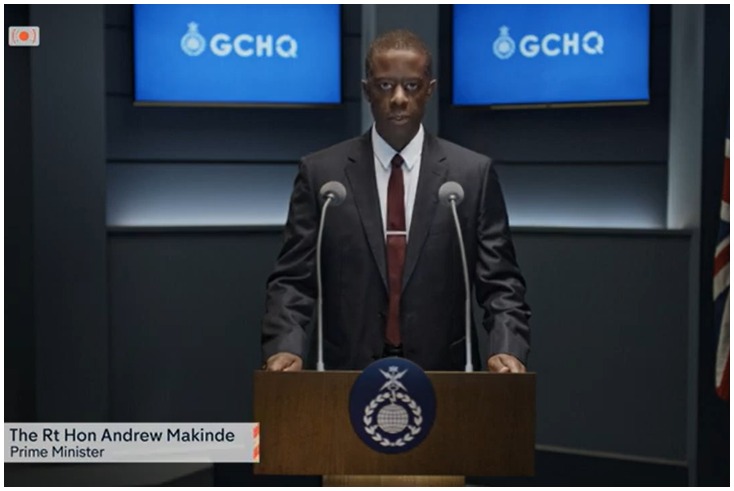 Channel 4 has unveiled an immersive multimedia campaign for its new cyber thriller series The Undeclared War.

In a nod to emergency government briefings, a 100-second stunt film starring Adrian Lester as Prime Minister and Simon Pegg as head of operations of GCHQ will deliver an urgent warning of an imminent cyber threat to the UK.

The film will be simultaneously broadcast in a roadblock across Channel 4, E4, Film4 and More4 linear channels as well as on Channel 4’s Twitter, YouTube and Facebook paid social on 10 June at 8.59pm.

There will also be an accompanying 30-second radio ad on 11 June where Adrian Lester in the same role as PM will give a speech saying: “We have learnt that the UK is under threat of imminent cyberattack by an as-yet-unknown foreign power. Your safety is our priority”, before the transmission is cut short.

The intrigue around the new series will be built up further through digital out-of-home posters (DOOH) leaking confidential and partially redacted messages from GCHQ alongside the tagline of the show: “The next front line is online.”

In addition, Channel 4 has used premium non-skippable 20-second in-stream trailers on Twitch, and a homepage takeover on the day of broadcast to target a cyber-interested audience, as well as showing clip trailers across Facebook, Instagram, YouTube and TikTok.

Zaid Al-Qassab, chief marketing officer, Channel 4, said: “Since Orson Welles first terrified the nation with his War of the Worlds broadcast, the idea of feeling that the nation is at the centre of a drama has thrilled audiences.  Channel 4’s new drama, The Undeclared War, is so relevant to our current global context that we wanted viewers to feel the jeopardy to our very way of life.  We think this campaign really brings the reality of cyber war into people’s homes.”

The six-part series is set in post-pandemic 2024 in the run-up to a British general election following a team of analysts in GCHQ battling a cyber-attack on the UK’s electoral system.

Timings of broadcast of the drama series will be confirmed next Wednesday.

Creative was by Channel 4’s in-house creative agency 4Creative and media was planned by OMD UK.