Busting some myths about young people and their mail 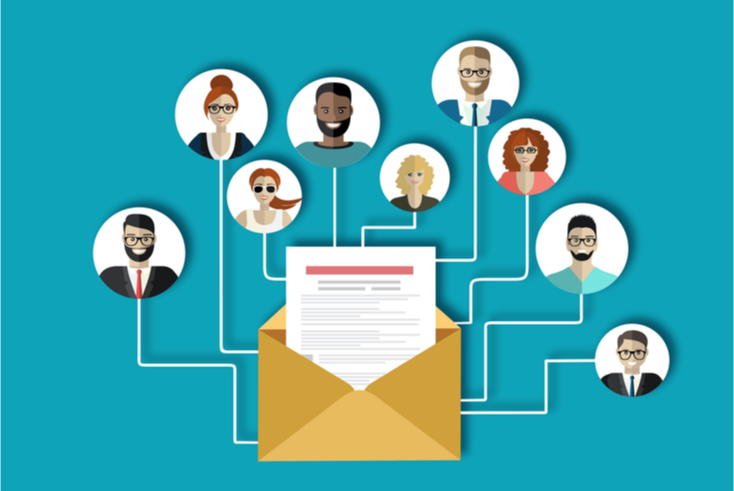 Is direct mail really the way to grab the attention of young people, as Rory Sutherland claims? JICMAIL’s Ian Gibbs delves into the data to find out

It’s a pretty raw deal for young people at the moment. If they’re not being vilified for the spread of Covid due to their natural inability to socially distance, then they’re missing out on some of the most formative experiences of their lives with a whole host of restrictions affecting their early days at university and their first steps on the career ladder, not to mention their generally more active social lives.

Perhaps it is little wonder then that Generation Z are reportedly going to be more mistrustful of government for the rest of their lives according to a study from the LSE released in June.

Young people’s mistrust of big institutions has also historically spread to both brands and their marketing efforts. Levels of ad avoidance (particularly in digital channels), is much more prevalent amongst younger than older audiences and many brands have redoubled their efforts when it comes to proving their authenticity to young consumers – knowing only too well what happens when their behaviour or false promises are called out online by Generation Z.

Easy for him to say maybe, but do we actually have the data to back up this assertion?

Of course this is where JICMAIL comes in – using independent media planning data to shine a light on the mail behaviours of the young. Joint Industry Currency data has never been more important. With many marketers operating in a media bubble and often guilty of planning campaigns using their own media preferences, trusted media planning data allows us to challenge our preconceptions about target audience media selection.

For the many planners who comfortably sit in the Gen Z age bracket, a good starting point would be to ask themselves whether the Rory Sutherland quote rings true for the last piece of mail they received!

Anyway, on to the JICMAIL basics: the average person in the UK interacts with the average piece of direct mail 4.44 times a month (an interaction can be anything from opening, reading, pinning mail to the notice board or passing it on to someone else).

17-34 year olds record average interaction rates of 3.85 times a month – less than the average adult, but not that much less given the noise that is made around the irrelevance of offline channels in targeting young people. Crucially, mail in younger households is just as likely to be shared as elsewhere (reaching 1.14 people per household on average), and will stay in home (i.e. before being thrown or filed away) for 10.4 days – nearly two days longer than the average mail piece.

If it’s potential audience attention you want, then clearly there is something to be said for the staying power of mail. 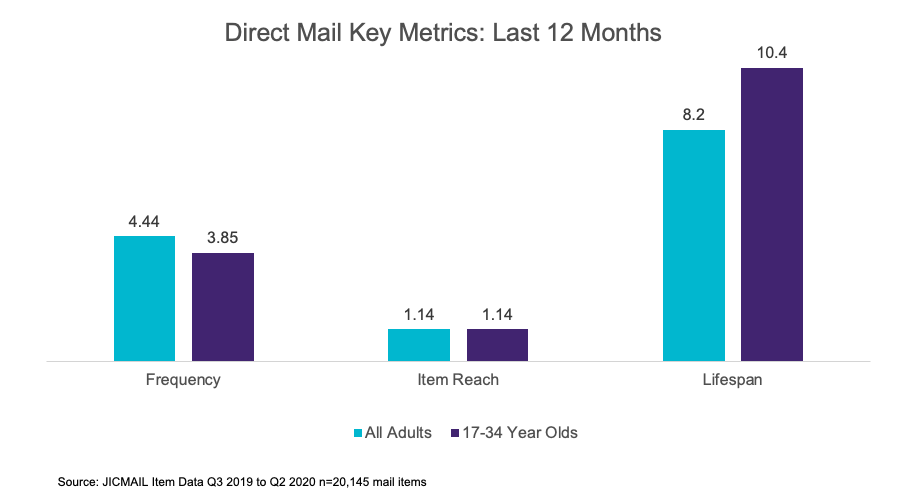 The point about attention is a crucial one. In the digital world – where a planner can readily target young audiences across a range of platforms – a viewable ad impression is one in which half of the creative is viewable on screen for one second.

It’s a low bar – yet one that only around 70% of desktop impressions currently manage.

For mail, an impression is only counted when someone physically interacts with their mail in a meaningful way. Reach and frequency may still be the cornerstone of good planning, but it’s only effective reach and frequency that really shifts the dial on campaign objectives.

The figures are even more pronounced for Door Drops, where average frequency of interaction differs even less for 17-34 year olds vs the national average. Door Drops in 17-34 year old households are more likely to be shared and stay in the home for nearly nine days on average. 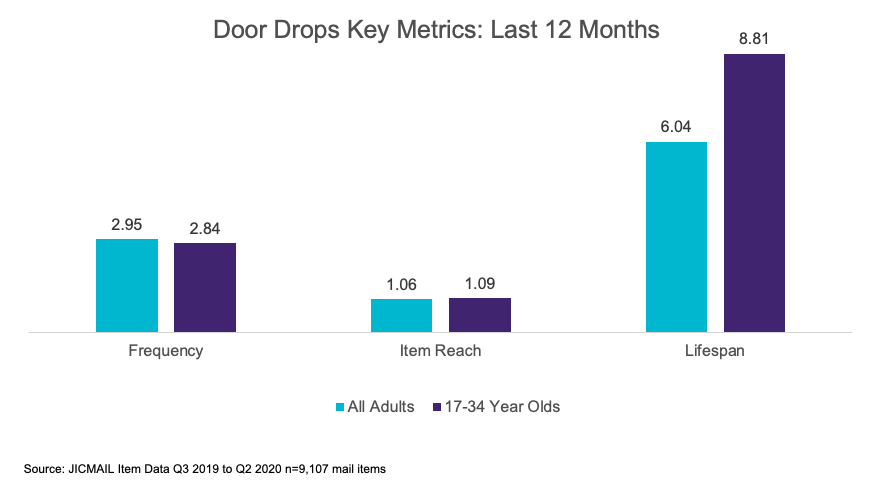 As we all know, frequency planning (and in particularly effective frequency – that all important range of exposures where your ad cuts through without irritating people through over-exposure) is crucial to the success of above-the-line brand campaigns.

The ability of Direct Mail and Door Drops to drive frequency and generate ad impressions from mail volumes speaks to the very real impact that the channel can have in delivering brand messages to hard-to-reach younger audiences.

However, just because the frequency and impression argument is still relatively novel in the mail world, we shouldn’t forget why mail often ends up on the schedule in the first place: because it really pulls its weight in driving response.

The chart below demonstrates the proportion of mail received by 17-34 year old household co-ordinators (i.e. the person who picks up the post off the doormat and sorts through it every day) that drives some sort of digital action – whether that be to an advertiser’s website or just an online visit generally (to a search engine or price comparison site for example). The figure sits at 17% – a number which was impressively high even before lockdown became a reality in Q2.

In the world of last-click attribution, marketers need to ask themselves how much of this credit is currently going to digital channels – a thorny topic at the best of times, but one which might reveal that some channels don’t quite deliver the audience efficiencies they were thought to in delivering young eyeballs.

This trend spans nearly all categories, whether commercial or not-for-profit. As our recent myth-busting charity webinar revealed, young people are more likely to go online after seeing a charity mailer and more likely to discuss it with other people vs the average UK adult. 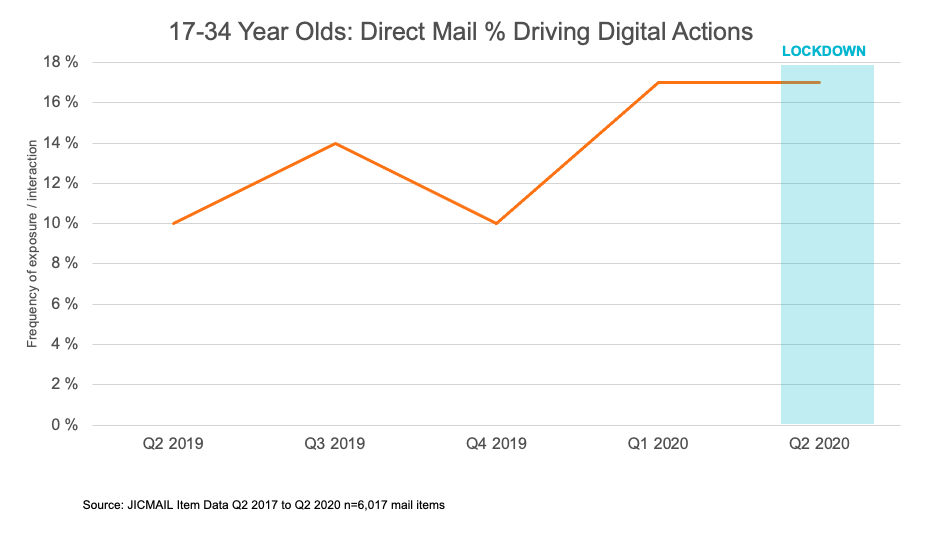 The numbers are as impressive for Door Drops. This time, the chart below displays the proportion of mail driving any sort of commercial outcome (so not just digital actions, but purchases, store visits and voucher redemptions too for example).

Hovering around the not-to-be-sniffed-at 20% mark in Q1, Door Drops did in fact enjoy a huge boost in response rates as young people spent more time at home during lockdown. One third of Door Drops prompted some sort of commercial action in Q2.

With effects running throughout the customer journey, Door Drops have to be considered as part of the multi-channel mix in targeting younger audiences. 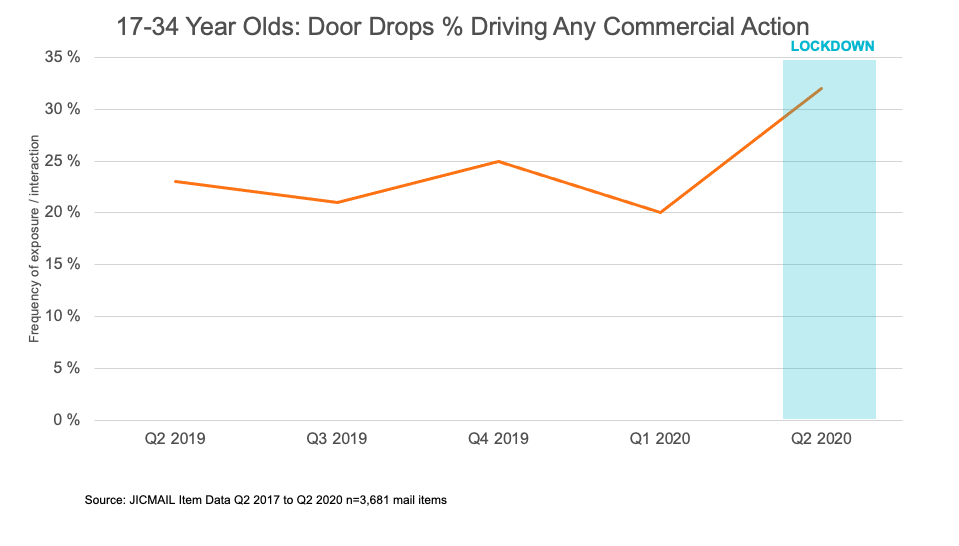 So those are the stats that back up the theory, but of course the simple fact of the matter is that advertisers are far less likely to target younger people with mail at the moment. In fact, 17-34 year olds are about half as likely as the average UK adult to receive either a piece of Direct Mail or a Door Drop.

In the short term this is in itself a great opportunity for brands who are firm believers in the established marketing theory of share of voice (and the growth opportunities behind maintaining Excess Share of Voice). To reach under-targeted audiences with mail is to stand out on the door mat; to improve creative visibility and raise those all-important levels of mental availability for your brand.

As a fusion of JICMAIL and TGI data tells us, those under the age of 24 are 40% more likely to claim that mail can change their mind about a brand than the average GB adult. A golden opportunity for brands who are focused on the upper funnel objectives of customer acquisition.

But if mail really has no place on the media schedule for brand campaign planning, even despite the evidence, the simple commercial action rates presented should tell you all you need to know about mail effectiveness.

Age might be among the most important targeting variables out there. Even if your brand isn’t interested in young people now, every advertiser should have an interest in talking to a potential future member of their target audience.

Rory Sutherland may have a nice pithy quote to sum up the opportunity in reaching young people with mail, but at JICMAIL we have the award-winning data to prove it.

Ian Gibbs is director of data leadership and learning at JICMAIL

If you’d like to learn more about using JICMAIL data to integrate mail into your multi-channel campaigns, please contact ian@jicmail.org.uk.