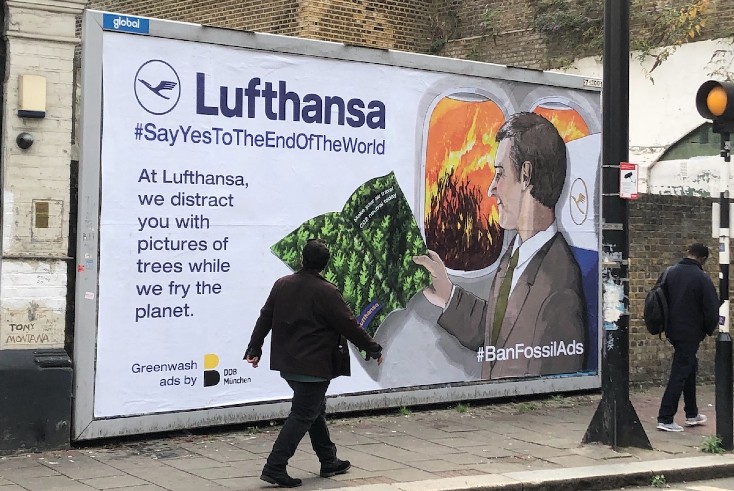 Activist group Brandalism has “hacked” over 500 billboards across Europe, placing artworks that satirise marketing for airlines that the group says are contributing to rising greenhouse gas emissions.

The move is an escalation of a growing campaign to lobby the EU Commission to introduce “tobacco-style” advertising bans against the fossil fuel industry—in this case, on airliners to “curb demand on flights”.

In association with the campaign, Brandalism is asking European citizens to sign the European Citizens’ Initiative to ban fossil fuel advertising and sponsorship.

Last month, France became the first country in the world to institute a ban on fossil fuel advertising, and the cities of Sydney and Amsterdam have also voted to institute similar ad bans. At Cannes Lions earlier this year, the festival was repeatedly interrupted by climate protestors who alleged the advertising industry is complicit in driving demand for greenhouse gases. 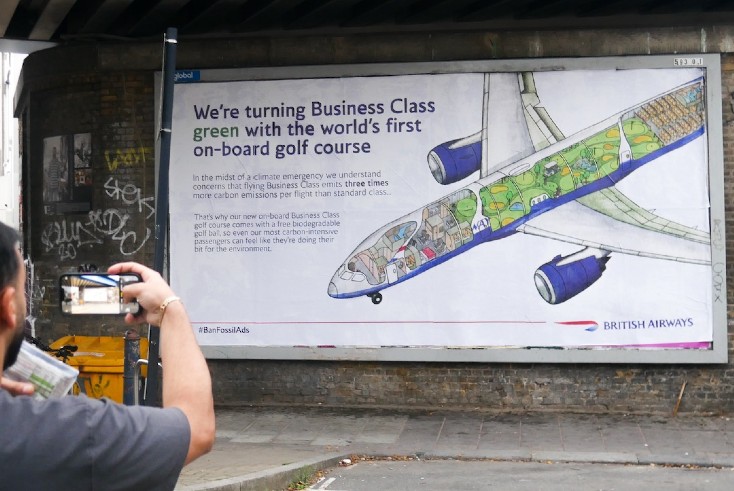 Brandalism’s Tona Merriman called out advertising agencies, as well as several airlines, for their purported complicity, stating: “The allure and glamour of high carbon lifestyles such as frequent flying has been purposefully crafted by the advertising industry and shows no signs of relenting – despite one of the hottest summers on record.

“Advertising agencies such as Ogilvy, VCCP, Dentsu, DDB Munchen need to consider their role in driving up emissions for airlines they work for such as British Airways, Easyjet, KLM and Lufthansa. We call on employees in those firms to refuse work for high carbon clients.” 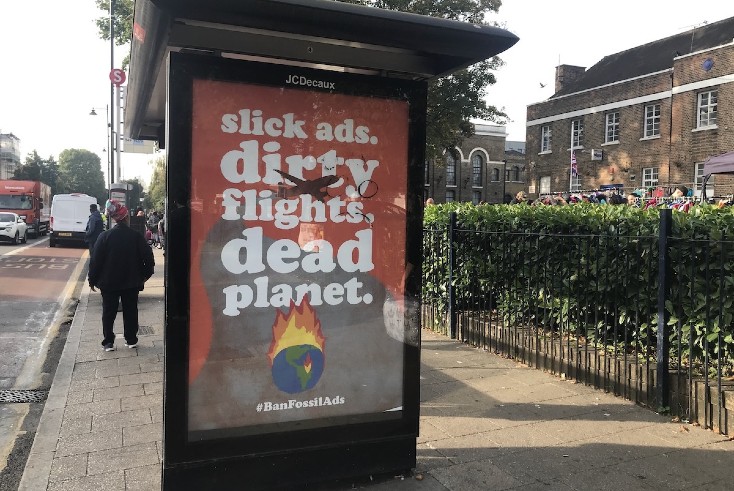 The creative artwork includes designs that accuse the airline industry of “greenwashing”, or making sustainability claims in marketing that mislead the public about the carbon emissions caused by the industry.

Artist Lindsay Grime, whose Lufthansa artwork (pictured, main image) took aim at the greenwashing practices of Europe’s most polluting airline, said: “[T]here’s still a total cognitive dissonance that comes from living in a capitalist world – yes, heatwaves and wildfires are now our reality but, still, why don’t you jump on a plane and go on holiday?

“Advertising totally fuels this, selling an image of flying as desirable, easy, something to be done without thinking. The social acceptability is bought through a nice dollop of greenwashing with soothing imagery and mentions of ‘carbon offsetting’ which is just a farcical PR exercise.”

“I don’t think we can underestimate the power of ads to influence us in explicit or more subliminal ways and this project aims to underscore that and tear apart the normalisation of promoting products and services we know to be highly polluting and destructive.”