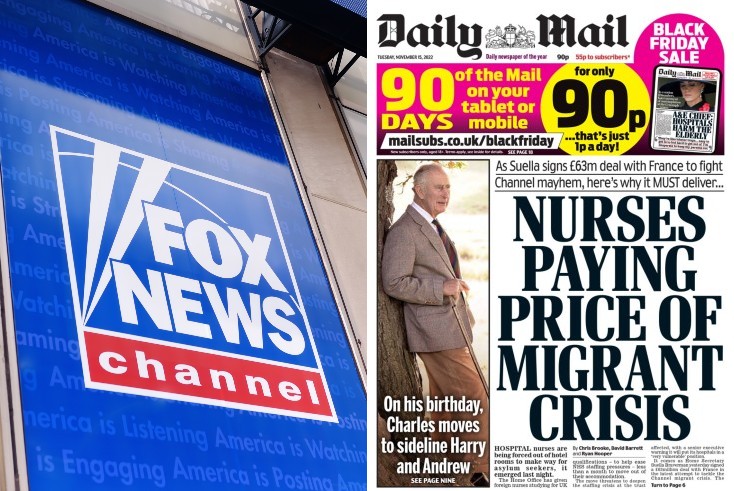 Individuals who consume news five days or more per week from certain outlets are more likely to believe in climate misinformation than those who don’t consume news at all.

That is according to the latest poll of representative populations in Australia, Brazil, Germany, India, the US, and the UK, conducted through YouGov’s online panel and commissioned by the Conscious Advertising Network (CAN) and Climate Action Against Disinformation (CAAD).

In the US, belief in misinformation about climate change was consistently correlated with consumption of Fox News. Whereas about a third of Americans believe in key misinformation statements such as that a significant number of scientists disagree on the cause of climate change (36%), that renewable energy is more expensive than energy from fossil fuels (34%), and that solar and wind energy can only be generated when the sun is shining and the wind is blowing (32%), high frequency Fox News consumers were significantly more likely to believe each statement (59%, 56%, and 60%, respectively).

In fact, the report notes that individuals who consumed news five days or more per week were more likely to believe in 41% or more of the climate misinformation statements included in the poll than those who do not consume news at all. This was particularly true in the UK of Daily Mail, Telegraph, and Times readers.

In the US and UK, however, television news—not social media or online news—was found to be the most common platform used by individuals who most believed climate disinformation in the UK and US.

Fox and the Mail were unable to immediately respond to request for comment by the time of publication.

Jake Dubbins, co-founder and co-chair of CAN, admitted that though the survey data doesn’t draw “direct links between individual statements and individual media titles”, it was nevertheless the case that “consumers of the Mail and Fox do over-index in believing these statements”.

He added: “There is clearly a huge perception gap between the science and beliefs of many people across the six countries polled. If action is to be taken on climate to secure [a] ‘liveable future’ then the media have to play a much bigger role in reporting the truth and giving climate science and actions a much higher profile.

“We have said for a long time that media investment is not just an exercise in delivering eyeballs but part of a supply chain that should match a brand’s values. If [a] brand purports to care about sustainability then it should consider its investments in media accordingly.”

General climate change misinformation was found to be more common in some countries than others. For instance, large numbers of respondents believe that fossil gas is a climate-friendly source of energy in India (57%), Brazil (40%), US (39%), and Australia (34%). In comparison just 25% of Germans and 14% of Britons agreed.

In an open letter written by CAN and CAAD, the organizations pleaded: “We cannot beat climate change without tackling climate misinformation and disinformation.”

Citing a report by news trustworthiness ratings company NewsGuard, CAN and CAAD noted that misinformation publishing is currently a $2.6bn/year industry and that it undermines decarbonization efforts.

The letter demands “swift and robust global action from COP decision-makers and tech platforms to mitigate these threats”.

Though some efforts have been made in the past year to identify and tackle the spread of climate mis- and disinformation, including by major tech platforms Google, Pinterest, and Twitter, the letter argues that a clear universal definition is needed to better direct efforts.

They also appeal directly to the CEOs of major digital platforms Meta, Google, Twitter, TikTok, and Reddit to accept the aforementioned definition, produce and publicize transparent company plans to eliminate the spread of climate mis- and disinformation, and refuse to publish advertisements if they contain climate misinformation or disinformation based on the above definition.

Nick Drew, CEO, Fuse Insights, on 16 Nov 2022
“Of course the elephant in the room around which the entire industry skirts is that consumers believe climate misinformation *BECAUSE* they consume these outlets - illustrated in prior research that showed how people's views changed after consuming a week of left-wing or right-wing mainstream news. Despite the constant focus on "OMG, some stuff on the internet isn't true!!", the real threat to democracy and the evolution of political discourse comes from outlets such as the Mail and Fox News, which have parlayed positions of moderately respected right-wing outlets (when right-wing wasn't a derogatory term) into the incredibly lucrative business of peddling conspiracy theories, racism and outright lies. They've deliberately stoked absolute black and white divisions, splitting the world into believers and non-believers; and prompted genuinely trustworthy news outelts such as the BBC (which really should know better) to diminish their standing by including absolute loons and wingnuts in their news reporting in the name of 'balance'. The fundamental fact remains that people don't believe lies and misinformation on the internet because they're on the internet. They believe lies and misinformation on the internet because they see them in 'proper' news outlets such as the Daily Mail and Fox News. And frankly as liberal, educated media industry folks it falls to us to highlight this fact and continue to highlight it, with the publication of every well-meaning and insightful study such as this one.”