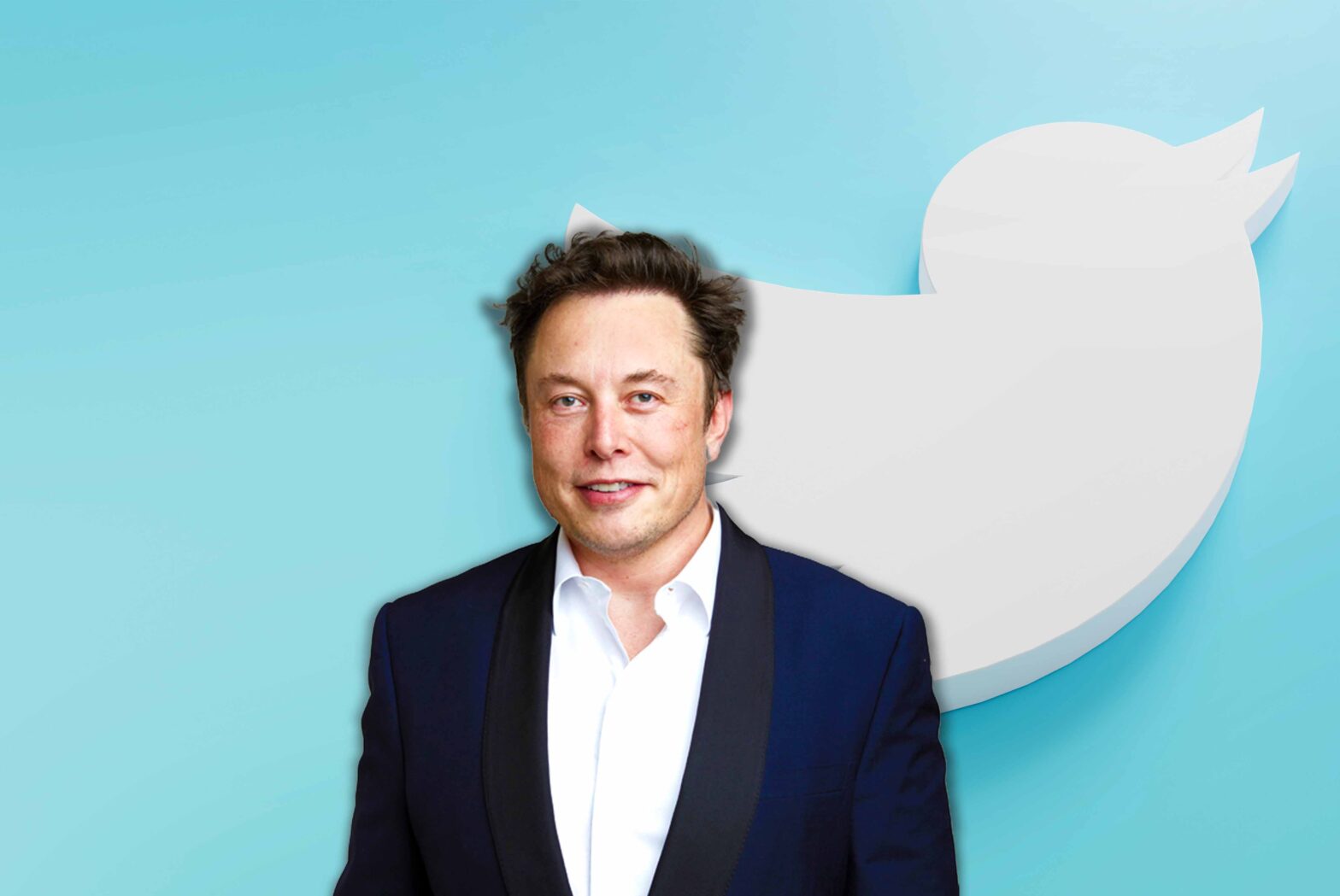 Elon Musk announced his deal to buy Twitter is temporarily on hold pending details from an internal report from two weeks ago which found spam/fake accounts represent less than 5% of users on the platform.

Meanwhile, two top executives at Twitter – Kayvon Beykpour and Bruce Falck – were fired by current CEO Parag Agrawal who “wants to take the team in a different direction” ahead of the potential takeover by Musk.

The truth is that this isn’t how and when I imagined leaving Twitter, and this wasn’t my decision. Parag asked me to leave after letting me know that he wants to take the team in a different direction.

The company also announced it would institute a hiring freeze and review existing job offers.

Adelaide is partnering with Mediahub Worldwide to launch Adelaide Attention Academy, the first media training program to be centered around attention.

The curriculum covers a broad range of topics including the current state of the digital media industry, how to disentangle the impacts of media and creative quality, practical applications of attention metrics throughout the campaign lifecycle, the expansion of attention metrics to new channels and systems, and the financialization of media.

The five-week training series is currently only available to Mediahub employees.

Five months after she stated she was retiring from advertising, DeCourcy is back to help elevate the social media and tech company’s global brand.

The Washington Post to open new bureau in Kyiv

The Washington Post is establishing a new bureau in Kyiv, Ukraine, signaling a “long-term commitment to covering Russia’s war in Ukraine and the people affected”, says The Post in an announcement.

Foreign editor Douglas Jehl says: “As the war enters a prolonged phase, this bureau will allow us to maintain our intensive on-the-ground reporting and ensure that we continue to deliver the distinctive and authoritative journalism that readers around the world count on us for.”

Tech giant Google announced a new My Ad Center at their annual I/O event yesterday that will allow users to control the ads they are exposed to across Google properties Search, YouTube, and Discover.

Users will now be able to select from a range of topics and brands they would like to see more ads from, and see fewer ads on topics they are less interested in.

Googlers can also limit personalization elements and opt-out of sensitive ad topics, and make changes or receive targeting information from within an ad itself.

The announcement marks a change away from strictly programmatic digital advertising, allowing users to provide inputs to drive or limit targeted ads.

Newly merged GroupM agency EssenceMediacom has unveiled its first round of global leadership appointments. They include:

EssenceMediacom CEO Nick Lawson stated: “In announcing our global leadership team, we are providing a clear statement of intent to both our clients and our people that the result of combining Essence and MediaCom will be a market-leading proposition that will deliver great work, integrated across brand and performance, as well as exciting career opportunities for the brilliant people who work for us.”

Disney reported a better-than-expected streaming gain in its Q2 financials, with Disney+ adding 7.9 million subs, a 6% increase from Q1 2022, against an expected 5.2 million gain to reach 137.7 million total.

Disney’s other streaming services Hulu and ESPN+ posted modest increases in subscribers for the quarter, growing to total subscriber numbers of 45.6 million and 22.3 million, respectively.

Despite the growth in subscribers, Disney’s stock fell over 5% in pre-market trading thanks to worse-than-expected overall earnings. Disney’s direct-to-consumer products lost $887m in the quarter due to increased production and content expenditure, more than triple the $290m in operating losses from Q2 2021.

Digital publisher Slate has named former HuffPost executive editor Hillary Frey as the publication’s next editor-in-chief, according to reports.

Frey fills the role left by Jared Hohlt, who stepped down in January and will be joining The New York Times’ T Magazine.

Slate, founded in 1996, is one of the world’s oldest digital publishers. It is managed by The Slate Group under the Graham Holdings Company (previously known as The Washington Post Company).

Brett Weitz, general manager for TNT, TBS, and truTV is exiting his role in the wake of the WarnerMedia-Discovery merger that concluded last month, according to reports.

Weitz joins a host of former WarnerMedia execs that have left the company post-merger. He was originally appointed to his role as GM in January 2019.

Chairman and chief content officer of US networks and former-Discovery lifestyle channels chief Kathleen Finch will assume management over TBS, TNT, and truTV among the company’s other US networks.

The Guardian has launched a range of new marketing creative across the UK to support the launch of its new flagship current affairs newsletter, First Edition.

The campaign, created by in-house creative agency OLIVER with media planned and bought by Omnicom’s PHD, centres around the tagline “scroll less, understand more” as it seeks to position the newsletter as an “antidote to doom scrolling”. 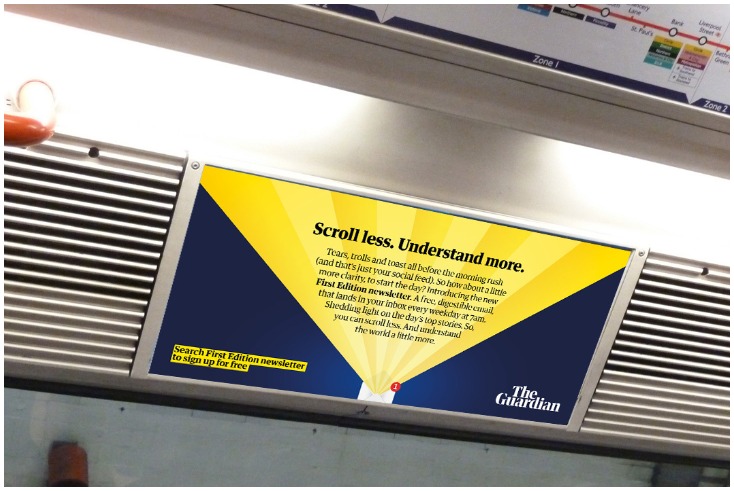 The promotional activity will run through May on train card panels, digital screens, podcast ads and paid social and search.

The out-of-home panels feature QR codes that direct people to quickly sign up for the newsletter.

Despite the strong revenue growth, total streaming hours for ITV declined by 20 million hours from 267 million to 247 million, a 7% drop.

Elon Musk says he will reverse Twitter’s ban on former president Donald Trump once his takeover of the social media company is confirmed.

“I do think it was not correct to ban Donald Trump, I think that was a mistake. I would reverse the permaban.”

Trump was permanently banned from the platform in January 2021 for inciting violence related to the January 6 insurrection.

A new microblogging platform, Better, which is seeking to challenge Twitter, announced it is moving into closed Alpha testing.

Better is advertising itself as “the only social media platform where all accounts will be verified before users are allowed to post and communicate with other users”.

Additional features include the ability to edit posts for a limited time after posting, a paid, no-ads option, and the ability to exclude their usage stats from data analytics.

Such features are not dissimilar from Elon Musk’s proposed changes to Twitter.

Elon Musk’s vision for Twitter: a dream too far?

Netflix tells employees ‘ads may come by end of year’

Netflix’s advertising tier may be coming to the platform by the end of the year, according to a report from The New York Times.

In a note to employees, Netflix execs said they were aiming to introduce the ads tier in Q4. The new timeline would be earlier than previously anticipated.

Netflix needs to offer more than a ‘tax on poor people’

TikTok is rolling out a new “Friends” tab, the company announced in a tweet.

As we continue to celebrate community and creativity, we’re bringing a Friends Tab to more people over the coming weeks, which will allow you to easily find and enjoy content from people you’re connected with, so you can choose even more ways to be entertained on TikTok. pic.twitter.com/GdVpPbxio6

The new feature will replace the “Discover” tab and will allow users to quickly find content from people they’re connected with on the platform.

Meet the Press is NBC’s flagship Sunday news program that has aired for 75 years; soon after Chuck Todd began anchoring the program in 2014, the show expanded to a daily offering known as Meet the Press Daily.

NBC News Now is a free, ad-supported streaming service under NBCUniveral that provides standard news coverage without the opinion and commentary features that are often shown on its cable counterpart.

Future acquires women’s fashion and lifestyle brand Who What Wear

Future is continuing its acquisition spree by buying Who What Wear, a leading digital women’s fashion and lifestyle brand.

The acquisition seeks to “further reinforce Future’s leadership in the beauty and fashion vertical”.

Who What Wear currently reaches an average monthly global audience of over 8 million unique users and has a social following of over 10 million.

Publicis Groupe and IPG announced they would also update their US health care policies in the wake of the potential overturn of Roe v. Wade, which would no longer protect federal abortion rights in the US.

The companies’ new policies would help to finance travel for employees who need to travel out of state to receive a legal abortion.

The Washington Post won this year’s Pulitzer Prize for Public Service for its “vivid” account of the January 6 insurrection, and The New York Times won Pulitzers for both National Reporting and International Reporting.

Other winners include the Miami Herald for Breaking News Reporting of the collapse of the Champlain Tower South condominium complex, Jennifer Senior of The Atlantic for Feature Writing, and Melinda Henneberger of The Kansas City Star for Commentary.

The two pieces published by The Guardian explore Russian attitudes to the war in Ukraine and the role of Victory Day in the political ideology of Vladimir Putin, respectively.

The releases come following the suspension of publishing by Novaya Gazeta in Russia due to overwhelming censorship related to the invasion of Ukraine.

The deal with include measurement of viewability, invalid traffic, and app-level brand safety, allowing brands and agencies globally to monitor the quality of their media buys on the platform.

The Advertising Association, the official UK representative for Cannes Lions, announced the winners of this year’s UK Young Lions competition.

Some of the winners include:

The participants were tasked with building a new campaign or adapting an existing campaign for the Advertising Association’s All In workstream in just 24 hours. The competition is applicable only to under-31s.

WPP to fund travel for abortions in US if Roe overturned

WPP will be updating its US healthcare packages to include funding for travel to receive an abortion.

The update comes following the report of a leaked draft decision for Dobbs v. Jackson Women’s Health Organization that would overturn the right to abortion in the US. The ruling, should it go officially announced, would mean that states would be allowed to restrict or disallow abortion in their jurisdiction.

WPP’s policy would mean that its staff members who live in states that have signaled they will make abortion illegal would be able to finance travel to a state where the procedure is legal.

In an internal memo obtained by Ad Age, WPP CEO Mark Read stated: “We don’t know the full details or impact of these potential changes in reproductive rights yet but we do know we want our people to have the same health coverage regardless of where they live. WPP is therefore updating its benefits plan to provide funding for travel that allows consistent access to healthcare and resources, including abortion care.”

Musk outlines goals for Twitter in pitch deck to investors

Elon Musk has distributed a pitch deck to investors outlining lofty goals for the social media company under his leadership, according to reports.

– Releasing a new subscription product ‘X’ which will obtain 104 million users by 2028.

In case you missed it last week:

Who guards the guardians? NewsGuard’s quest to clean up online news

GroupM surprise: DOOH ads ‘as entertaining’ as TV and radio